Congratulation to all students for another EPIC marching season! 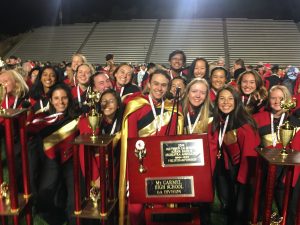 We only have 1 marching rehearsals this week so they are all vital!

*Parents! If your student is not riding on the bus home from Arcadia, please send in a written note by Wednesday so our chaperones will know who is riding the bus home.

WEDNESDAY- DUE TO WEATHER, THE REHEARSAL IS CANCELED FOR BRASS AND WINDS! GUARD WILL PRACTICE IN S11 AND PERCUSSION IN BAND ROOM!

Students should bring their own food or money for lunch AND dinner! Also, bring water and snacks for the bus ride. Plan on approximately $30.00 for the two meals. Also bring warm clothes for the evening.

A good suggestion is wearing thermal undergarments or a double T-shirt under the uniform since it is usually colder at Citrus College.

Arrive at Santa Anita Race Track parking lot by 10:00 AM

Parade Band changes into uniform. Non-parade will go with chaperones to the parade route and then follow MC Parade band to Arcadia High School.

*Because championships start an hour earlier, we will leave immediately after arriving at Arcadia High School (after Parade Band changes back into street clothes) for Santa Anita Mall for lunch/dinner. There will be a food court and restaurants for students to buy food.

EVERYONE back at the buses no later than 3:45 PM

Senior Line will happen by the buses at 3:50 PM Sharp!

5:15 PM Approximate arrival at Citrus and change into uniform

After Performance, come back to Semi and change into street clothes.

Wear Red! We will be going onto the field for an All-Band Retreat! We will be on field with all the performing bands to celebrate the end of the season and awards!

After awards, load buses and head back to MC

We should arrive at MC approximately 11:30 PM.

Parade band Call  6:45 AM at Mt. Carmel! Grab your uniform, instrument, shako and load the bus! We will be taking buses!
We will change into uniform in National City.

On Competition line-10:30 AM we will leave immediately after we finish the parade route!

LOAD SEMI FOR Chula Vista Tournament when we arrive back to MC after the parade. Approximately 12:15 PM

Field Band/Guard Call 5:00 PM at Mt. Carmel. We will be taking busses!

*Maps and more info. Will be uploaded soon!

After Rehearsal, parents will be in the parking lot for “Trunk or Treat” join in on the fun!

After the game: Load semi, take home all your gear!!!

Directions for Parade Band: Traveling southbound on I-15, take the Miramar Rd. exit. Proceed approximately two (2) miles to Camino Ruiz and turn right (Northbound) to Mira Mesa High School Drop off as close to Mira Mesa Blvd as you can. You will see the campus to the right.

There will be no carpool parking on campus.

*REMINDER! WE WILL BE ATTENDING THE WESTVIEW TOURNAMNET ON WEDNESDAY NOVEMBER 6TH! WE PERFORM AT 8:30 pm

Congratulations Percussion on Sweepstakes and Band/Guard on your 1st Place finish at Poway!

*Will leave the stadium after halftime and change out of uniform!

Saturday–Mt. Carmel Tournament of Bands! We still need more Parent and student Volunteers to help please go to the Tournament page (Link on the website) Also, please help with food/drink donations or kindly donate a Costco gift card to the MCMF mailbox to help our foundation maximize our profits for the day! WE NEED ALL HANDS ON DECK!